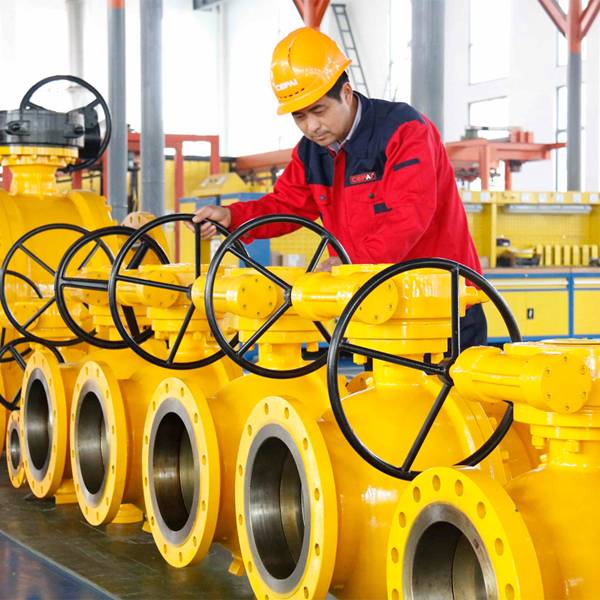 We're going to dedicate ourselves to offering our esteemed shoppers with the most enthusiastically considerate solutions for Back Check Valve , Gate Way Valve , High Pressure Check Valve , We warmly welcome your participation based on mutual benefits in the near future. Professional Design Roller Gate Valve - Two piece cast fixed ball valve – CEPAI Detail:

● Double-block and bleed
Two piece cast Trunnion Ball valve produced by CEPAI is designed with ball front seat sealing structure. The two valve seats of fixed ball valve (pipeline ball valve) can independently cut off the medium at the inlet and outlet ends to achieve the double blocking function. When the ball valve is closed, the inlet and outlet ends of the valve are under pressure at the same time, and the valve chamber and two end channels of the valve can also be blocked each other the remaining medium in the chamber can be removed through the bleed valve.

● Blowout-Proof Stem Design
TheTwo Piece Cast Trunnion Ball Valve produced by CEPAI has an anti-blow-out structure for the valve stem, which can ensure that the valve stem will not be blown out by the medium even under extreme conditions such as abnormal pressure rise in the valve chamber and failure of the packing pressure plate. The valve stem adopts a bottom-mounted structural design with an back seal. The sealing force of the back seal increases with the increase of the medium pressure, so it can ensure the reliable seal of the stem under various pressures.

● Automatic pressure relief of valve chamber
Two piece cast Trunnion Ball valve produced by CEPAI can automatically relieve pressure by driving the valve seat by its own force when the liquid medium trapped in the chamber of the valve vaporizes due to the increase of temperature, resulting in abnormal pressure rise in the chamber, so as to ensure the safety of the valve.

● Optional locking device
Two Piece Cast Trunnion Ball Valve produced by CEPAI has designed a keyhole structure so that clients can lock the valve according to their needs to prevent misoperation.

Related Product Guide:
Our company insists all along the quality policy of "product quality is base of enterprise survival; customer satisfaction is the staring point and ending of an enterprise; persistent improvement is eternal pursuit of staff" and the consistent purpose of "reputation first, customer first" for Professional Design Roller Gate Valve - Two piece cast fixed ball valve – CEPAI , The product will supply to all over the world, such as: European, Austria, Switzerland, Now we have a excellent team supplying specialist service, prompt reply, timely delivery, excellent quality and best price to our customers. Satisfaction and good credit to every customer is our priority. We have been sincerely looking forward to cooperate with customers all over the world. We believe we can satisfy with you. We also warmly welcome customers to visit our company and purchase our solutions.
The company can think what our think, the urgency of urgency to act in the interests of our position, can be said this is a responsible company, we had a happy cooperation!

By Elsa from Bahrain - 2017.04.18 16:45 The goods we received and the sample sales staff display to us have the same quality, it is really a creditable manufacturer.